Set List
Testify
So Excited
Voodoo Chile (Slight Return)
Pride and Joy
Mary Had a Little Lamb
Tell Me
The Things (That) I Used to Do
Look at Little Sister
You'll Be Mine
Love Struck Baby
Dirty Pool
Hug You, Squeeze You
Texas Flood
Little Wing
Third Stone from the Sun 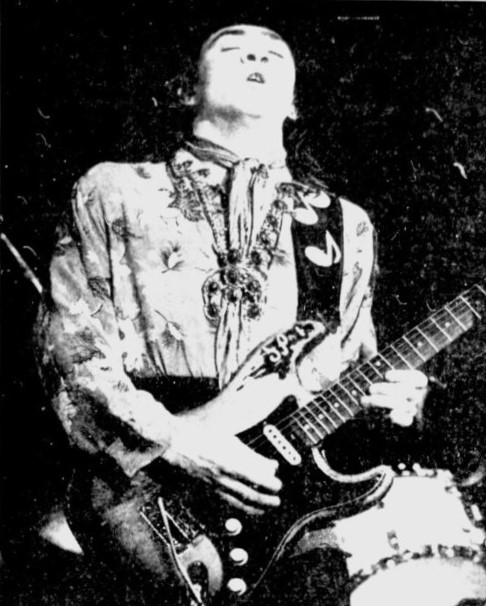 The billboards outside the Spectrum advertised "a legend in the making".

And rock fans who plunked down a bargain-basement three bucks to see Stevie Ray Vaughan Monday night came out of the club convinced the hype may have been an understatement.

Vaughan is "a legend in the making" only in the sense that his reputation is just beginning to extend beyond the 28-year-old guitarist's native Texas. Touring in support of their debut album, Texas Flood, Vaughan and Double Trouble (bassist Tom [sic] Shannon and drummer Chris Layton) are knockin' 'em dead across the continent with their high-energy synthesis of urban blues and raunchy rock.

The SRO Spectrum audience knew it was in for a wild evening when Vaughan emerged from the wings, picked up one of his five Fender Stratocasters and let loose with a torrid solo. Within seconds of plugging in, Vaughan had the crowd mesmerized with the fastest, cleanest, most emotional guitar work anyone had heard since the late Jimi Hendrix plucked his late note.

Despite the current popularity of synthesizers and similar dehumanized gimmickry, the electric guitar remains the heart and soul of rock 'n' roll. And nobody - but nobody - is playing guitar these days with the technical virtuosity, taste and showmanship of Vaughan.

Mixing classic blues, Hendrix covers and original songs off Texas Flood, Vaughan and his rock-solid rhythm section whipped through a searing, 90-minute revival of the guitar's enduring ability to express the emotional power of rock.

A couple of Monday night's tunes began as balladverts, but Vaughan inevitably pushed the songs up tempo during his solos. And up tempo meant way up tempo. With Shannon's bass and Layton's drums punching out frantic bottom, Vaughan took off in a mind-numbing, beer bottle-rattling cascade of notes.

How fast is Stevie Ray Vaughan?

Let's put it this way: If the Texan had become a typist instead of a musician, he'd be good for about 200 words a minute. Eddie Van Halen is arthritic by comparison.

Vaughan's technical flash was supplemented by impeccable taste and a soulfulness born of the blues tradition that touches every pop musician growing up in the southern U.S.

Vaughan's style has been influenced by every blues guitarist from Robert Johnson through to modern masters such as Albert King. Using his instrument in the classic call-and-response motif of the blues, Vaughan bends notes to the point of breaking, stretches them with the vibrato bar and pushes each solo into frantic overdrive with torrid licks and power chording.

But the overriding influence in Vaughan's playing is Hendrix. The impact of Hendrix on the young guitarist extends to Vaughan's choice of hats: a flat-top, wide-brimmed black Stetson decorated with a band of linked silver medallions.

And just in case fans missed the point they were watching the reincarnation of the Great One, Vaughan borrowed several of Hendrix' unorthodox and entertaining tricks. At various times, he played the guitar behind his head, behind his back, tucked under his chin like a violin, tucked into his gut and pointed straight out, flat on the stage floor ... heck, by the end of his third encore tune Stevie Ray was even plucking a few notes with his teeth.

The gimmicks were cute, but what brought tears to the eyes of Hendrix nostalgists was Vaughan's ability to make his Strat cry, moan and wail. It was fortunate the guitar did do most of the singing, because Vaughan's vocals were slurred and totally unremarkable.

Fans of virtuoso electric guitar should make a point of catching this guy on his next swing through town. Stevie Ray Vaughan is a legend who has arrived.

Show Recollections
From roadie BYRON BARR's tour diary: "Dudes at the club had it together. ... Best show on this tour - no doubt."