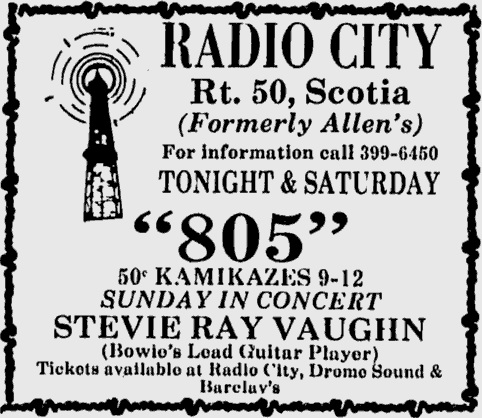 One of the patrons, WILLIE JONES: "Radio City, a three-story house sitting on a gravel parking lot was sagging from the heat. The brown wooden siding was thick with repaints, which did little to hide the effects of age and nature. It felt hot in the afternoon sunlight. In the parking lot was a large brown tour bus with a southwestern mural painted on the rear panels. We assumed correctly that it was Stevie Ray's. We left the car parked in the afternoon heat and walked into the cool bar. The fat man at the door asked what we wanted, and we replied, 'Tickets for tonight's show?' 'Five bucks each,' he answered.

"There was a stage to the right of the entrance, fronted by a dance floor; a bar far to the left and across the room sat a video game wall. Upstairs was a horseshoe balcony, under which sat several rickety wooden booths, carved by countless hunting knives. Placed randomly between the dance floor and the bar were round wooden tables with chairs placed loosely around. A review of the environs was interrupted when Stevie Ray and his band mates took the stage and picked up their instruments. The ensuing sound check was special. We were the only audience in the bar. Stevie Ray played 'Testify,' 'Pride and Joy,' and 'Mary Had a Little Lamb.' He played as if the house was packed.

"[Afterwards,] Stevie Ray came straight to the bar. We exchanged hellos and gushed praises on how great the warm-up sounded. Stevie Ray ordered a drink [and asked], 'Are you guys hungry?' A roadie appeared with a hot pizza and brought it up to the bar. Stevie Ray offered us a slice. Tipsy from the dollar beers and heady from the phenomenal music, we three each had a slice.

"After wolfing them down, I went to the video wall, followed after by Stevie Ray. The staff had just plugged in the row of video games. We played a now-extinct game called "Dig-Dug," involving a worm eating his way through dirt. Stevie Ray played a game and I played next. The bar pulled the plugs on the games each night and the previous high scores were erased. Therefore, Stevie Ray and I entered our initials as high scorers. At one brief period of time, the leader board at Radio City read something like, 'WSJ 95,650,000, SRV 87,750,000.' Back at the bar, I asked Stevie Ray for an autograph. He signed 'To Willie - All My Best - Stevie Ray.' I was starstruck and at the same time I felt comfortable as we chatted like old friends. We talked about songs and he made us feel relaxed. He was so genuine."