October 12, 1984: Syria Mosque, Pittsburgh, PA
with Jason and the Scorchers 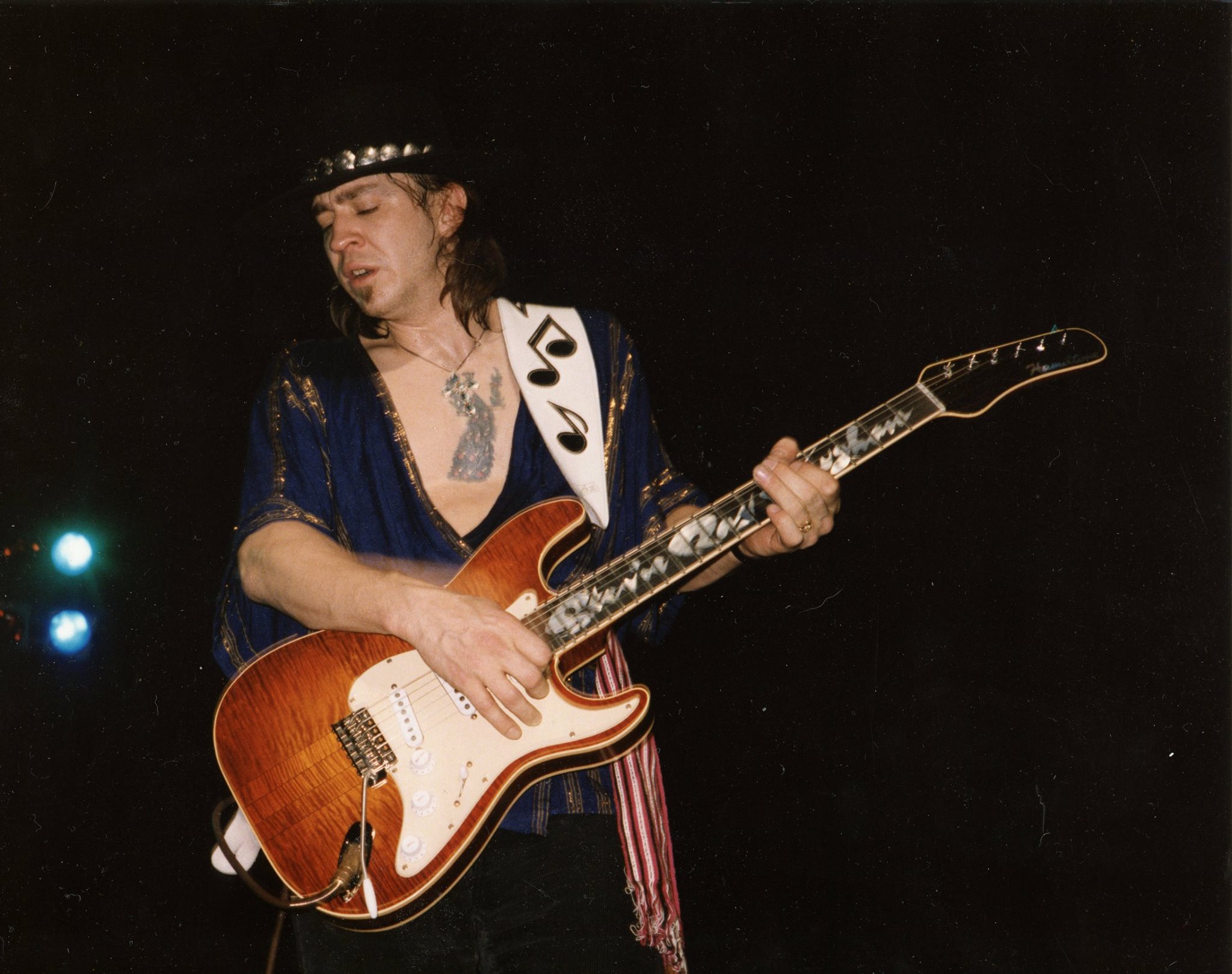 Stevie Ray Vaughan dropped the mantle of his recently found legend to a worshipping Syria Mosque last night and, while it shone with power and grace, the guitar god they craved never arrived.

The 30-year-old Texas blues guitarist is riding a wave after being discovered, as it were, by the Rolling Stones and then featured on David Bowie's hit LP, "Let's Dance." And since the glory days of the 60s, the solo guitarist has been reduced to stimulating puberty in young boys during heavy metal shows. The time is ripe for a Vaughan, but last night Stevie Ray was not on time.

Vaughan opened with "Scuttle Buttin'" from his recent LP, "Couldn't Stand the Weather" and what seemed like some on-the-spot shuffle before settling down to the real work, his cover of Jimi Hendrix's "Voodoo Chile [Slight Return]."

While Vaughan revived the piece with a technical virtuosity that was clean and cocky, he did not roll back the rock and call Hendrix forth, like Lazarus. The piece was a hard bit of nostalgia, not the chilling awe inspired by deja vu.

His best numbers were "Cold Shot" and "Tin Pan Alley," also from "Weather."

In the latter, he sat down and ran his fingers up the guitar like some disturbed insect, holding the notes out and making the strings moan until they sounded out of breath in this tale of murder for whiskey, wine and gin.

Drummer Chris Layton and bassist Tommy Shannon added color to these songs of joy in pain, especially "Pride and Joy" from his first album "Texas Flood" and "The Things That I Used to Do."

But something was off. The crowd implored Vaughan to frenzy it, command it, take it. He never did. He was merely very good, which is not good enough for the current legend in the making.

The Nashville punkabilly band Jason and the Scorchers opened with a wry and lively set of country funk but were rudely dismissed by the rabble waiting for the godhead. Too bad. Jason's quite a character - a lanky pole in fringes with the ironic edge of a Hank Williams in the Mudd Club. And he's quite a rocker to boot, matching his country lungs with his trio's new wave spine. They put it together in their driving "Hot Night in Georgia" and a lively cover of Dylan's "Absolutely Sweet Marie," both from their first LP "Fervor."

Their fascinating new fusion could signal a new twist in the next wave. It just might now be harder to keep them down on the farm after they've been scorched by Jason.

Now we've got Stevie Ray Vaughan, in low-heeled boots, a red and white sash around his waist and a flat-brimmed hat with a silver band like the grandees of Spanish California wore.

He's the Gary Cooper of the guitar and not just because he's a Texan who dresses like a cowboy. "Hi," "How y'all doin'?," "Thank you so kindly" and "We'll be right back" were about all he had to say to 2,329 fans at the Syria Mosque last night. He introduced his band, Double Trouble, but no songs.

The fact is that Vaughan didn't have to say much. His guitar said it all. Quiet, please - genius at work.

There were two small overhead rows of colored lights upstage and two floodlights in the balcony. He didn't jump or run around the stage. He didn't do enormous arm windmills like Pete Townshend. He just stood there - and sometimes sat, on either a stool or a monitor - and played.

Whatever you've heard a guitar do - wail, cry, warble, soothe, sting, excite, tease, scorch, sear, fry, squeal, hoot, laugh, snarl, chatter - his did it. And often simultaneously to boot. At times it was hard to believe only one guitar was being played.

If that sounds overly anthropomorphic, so be it. In Vaughan's hands, a guitar comes alive and is more than wood and wire.

Many numbers were all-instrumentals, with bassist Tommy Shannon and drummer Chris Layton giving solid support. Titles were unimportant; you just sat back and listened and enjoyed and marveled at the flashing fingers, at how he could make the instrument croon like a Hawaiian steel guitar.

Yes, there were songs with words, but usually those words weren't all that important. Vaughan's roots are in blues; hence most lyrics were standard fare about either love gone wrong or love that's so good you hardly can stand it.

If you want meaningful words, you go to hear Dan Fogelberg, James Taylor, Bob Dylan, Gil Scott-Heron or Gordon Lightfoot. You go to hear Stevie Ray Vaughan for the music.

Proof of that was his long rendition of "Voodoo Chile (Slight Return)," which had very few words. Hendrix wrote and recorded it, so comparisons are inevitable. Vaughan's version stacked up more than admirably, and the crowd loved it.

To his credit, however, he handled lyrics very well. His voice has a mushy, sometimes gritty quality a la Cream's Jack Bruce, but it's not unpleasant and often has a lot of soul.

There were the Berry-like "Love Struck Baby," where Vaughan put his hat on the mike and played behind his head; "Cold Shot," with its slight bounce; the happy, boogie-woogie "Pride and Joy," where something Shannon did or said broke Vaughan up so that he couldn't sing because of laughing - but he kept right on playing.

Jimmy Reed's [sic] "Tin Pan Alley" was the exception to the lyric tenor. It has superb words about a city's tenderloin and its down-and-out denizens who live solely "for their whiskey, wine and gin."

It was a long, dramatic showpiece. Vaughan and Double Trouble kept it slow and mournful, punctuating the lyric attacks (a woman's scream, a gunshot) with the appropriate instrumental sounds and Vaughan's right hand becoming a near-blur as he flipped it over the strings at the guitar's neck at song's end.

A showman? No. An artist? Yes. Vaughan was so low-key, in fact, that when the encore ended and he thanked the fans for making him and Double Trouble feel good and they left the stage, a lot of fans hung around - even when the house lights came on and taped music was played.

They just couldn't believe it was over. But Vaughan and Double Trouble were headed for the Decade a few blocks away to jam with Bon Ton Roulet. The genius had more work to do.